There have been some massive technological advancements in the field of Desktop PCs and laptops. Every day we get to see some perplexing new models and mind-blowing modifications to different components.

In all this evolution, one component of the PC has survived. It’s the PC fan. The PC fan remains the primary method to cool down your PCs and laptops. Although other cooling methods have come about, most PCs still use a fan to prevent overheating.

Companies nowadays are allowing their customers to build customized PCs. You get to pick everything from the memory and processor to the components that will help the PC case airflow. It’s the latter that we will be looking at today.

Why do We Need Desktop PC Airflow?

If you are building your PC for the first time, you should keep in mind the importance of desktop PC airflow. Most components in a PC, for example, a CPU, GPU, etc., have specified temperature ranges in which they operate.

All these components generate constant heat, which gets stored inside the PC case. This heat circulates inside the PC and must be removed, as it can warm up the other components like the motherboard, processor, etc. This can, in turn, slow down your computer big time and affect its overall performance.

The desktop PC airflow needs optimization, and this PC airflow guide will help you set up and choose a PC fan for airflow and proper cooling of your desktop PC.

When you are setting up a PC fan, your main aim is to configure how the air will flow inside the case. As such, make sure that you select the best case within your budget. The PC fan installed should move the cool air inside the case, and it should ventilate out the unwanted hot air causing all the trouble.

The primary gauge to measure the pressure of the air inside a PC case is a cubic foot per minute rating shortly used as a CFM rating. A higher rating is preferred, and you can check PC case fans online.

There are essentially three main types of desktop PC airflow configuration. We will start by developing an understanding of these types to configure PC cooling and figure out which one is the best fit for the PC airflow optimization in a case.

Two key terms are used here for explaining these three types to make them easy to understand for a layman. The main focus here is PC fan airflow direction. 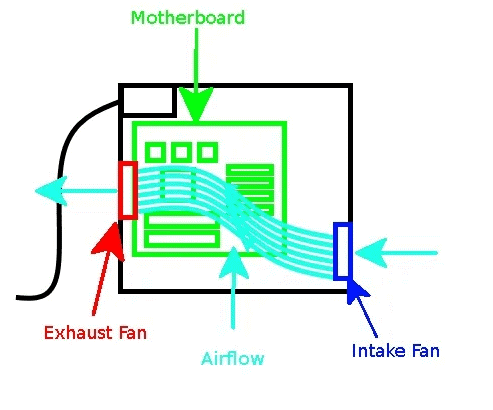 Image Source: A Guide to Intake/Exhaust Fans and Airflow for Your Desktop Computer – MakeTechEasier

At first glance, having positive air pressure is a good thing, but you can find yourself with a lot of stagnant air inside the case if enough external air movements do not occur.

It could increase the temperature of your PC case, damaging the internal components along the way.

Again, at first look, this seems like an effective way of cooling down your PC. But it can also increase the number of dust particles inside the PC case and adding a filter to tackle the dust particles is particularly difficult. 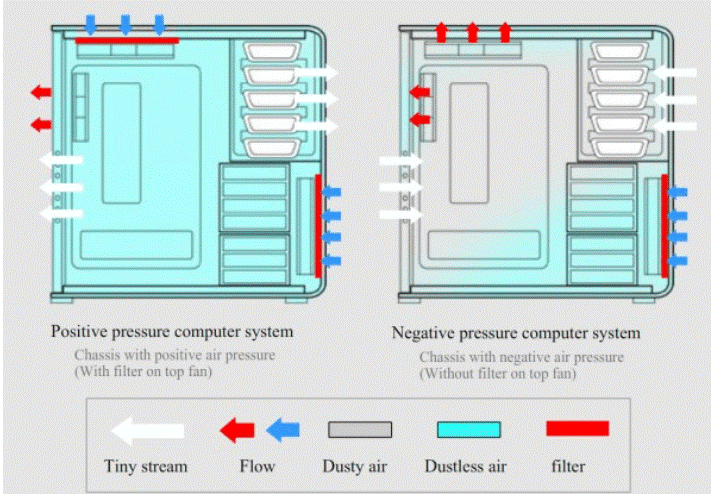 It is considered the best airflow pressure for a PC case because of its balanced nature. The air pressure and temperature are more suitable for all the components inside a PC case to work efficiently.

A comparison table illustrating some salient features of the three types shown below:

We have already established that the air travels in from one side of the PC case and goes out from the other side. The PC fan can be an intake or exhaust, depending upon the position of the fan or how it is mounted.

You can install a fan in four sections of the PC case: front, back, top, and bottom. The front and bottom sections mainly occupy the intake fans and draw the fresh air inside to pass through the heated components.

While the top and backside occupy the exhaust fans mainly because the hot air goes upwards and draws it outside to keep it away from internal components. So, proper fan positioning is vital for PC airflow optimization.

Dust is the Quiet Hunter

If you live in a dry and dusty environment, or you smoke in the room where you have set up your PC, then your PC is in extra trouble. It is essential to protect your PC from dust. Otherwise, no PC fan can protect your internal components from getting roughed up and lose their potency.

It is vital to install a removable air filter in your PC case and make sure the air passes in and out through it. It is important to blow the dust off all the components inside the case. Cleaning the filter every once in a while, is also essential to keep it running at the optimal requirement to increase the airflow and cooling power.

Cable Management and Other Obstructions for the PC Airflow

Ideally, it is better to have no obstructions (like cables) in the path of air and let it move freely. It will enable the intake and exhaust fan to work more efficiently for the PC case airflow and effectively cooling down all the components.

Some of the cables inside the PC case like the unused power supply cables, cause the hindrance. Cable management is not given much importance by PC users, but an organized case interior is most certainly a big help. The interior of the PC case will look smooth and tidy and helps in PC airflow optimization.

Water cooling is more expensive, yet it is not necessarily an effective method. For your understanding, and to put things in a simple perspective, water-cooled components have little effect on the internal airflow of the PC case. They may make your PC run cooler, but there is also the added risk that goes along with water coolers.

One big problem for water coolers is the pump. Not only does that add additional noise and cost, but it also adds a point of failure and a nasty one too. The water-cooler pumps are more likely to fail than a PC fan, and when they do, it is more catastrophic for your PC and much harder to detect.

Now, if your PC fan stops, then you can probably see that it is not spinning. You can slap a case fan on there until a new one arrives. But a water cooler will remain undetected for a while, and it might be too late by the time you detect a problem.