TVs used to be little more than monitors with installed speakers. They took a signal from some other gadget, such as a DVD player or even a VCR, and then output a picture on the screen as well as sounds through the speakers.

TVs are no longer as basic as they once were. TVs now have the potential to open applications, search the web, function as digital assistants, and much more thanks to the advancement of smart technology.

Smart televisions can interpret data in the same way that PCs and smartphones do, but with that power comes all of the same problems that smartphones and PCs do, such as viruses.

In this article, we will answer the following question: Can you get a virus on your smart TV? And if you do, then how to protect your TV.

Can a Smart TV Get a Virus?

Yes, a smart TV can become infected with a virus or malware. Most of us are unaware that our smart home gadgets are just as susceptible to spyware and viruses as our smartphones and laptops.

In reality, two separate television models were claimed to be affected by smart TV spyware and viruses in 2019.

In a tweet that’s since been removed, Samsung encouraged Smart TV owners to check their devices for security flaws and malware. This was not taken lightly, as many flew into a frenzy on Twitter, asking whether the TVs had been hacked or if anything awful had occurred. 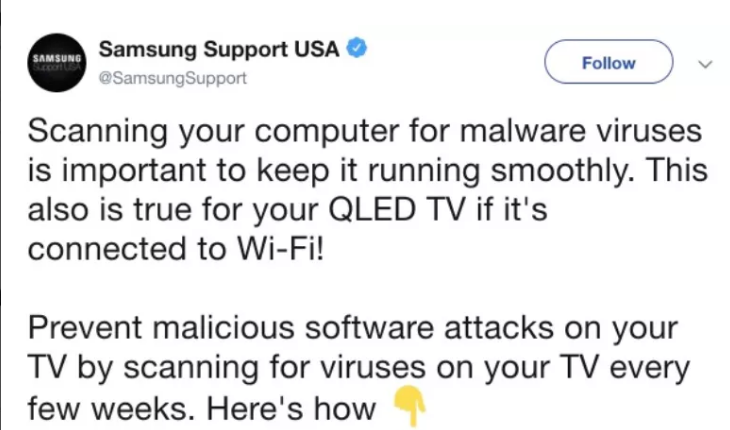 A further case in point was the Amazon Fire TV bug, which exposed viewers to a cryptocurrency-mining Android infection.

Sideloading an external program, putting a contaminated USB stick into the TV, or an application file being changed with ransomware via a man-in-the-middle type of assault are all methods your TV may receive a virus, resulting in your TV locking up.

Furthermore, built-in capabilities on your smart TV, such as the microphone, might be hacked and utilized to spy on your chats.

According to Tom’s Guide, in 2015, a user stated that he unwittingly turned his Samsung TV into a breeding ground for trojans. According to the tale, the user inserted a USB stick into the TV without realizing it was infected with win32.waldek.ACL. This is a trojan known for its ability to modify the victim machine’s DNS and limit access to certain websites.

Nothing appeared to have occurred to the TV, but when the user examined the thumb drive on a computer, he discovered that it was infected with that same malware. His anti virus had no trouble breaking the win32 variation.

However, every time he plugged the USB into his TV and afterward returned to the PC, his antivirus software detected an infection.

Darren Cauthon, a software developer, stated that his Google Android-powered smart TV caught up with a bug in 2015 while attempting to download a movie-streaming application.

Cauthon remembered watching a movie when the screen suddenly froze. Naturally, he attempted to restart the television. The software developer was notified that the device had been frozen owing to certain “suspect files.”

How to Prevent your Smart TV from Viruses?

While your smart TV might appear to be resistant to infection, this does not imply it is not vulnerable. Indeed, several smart TV models are vulnerable to remote hacking, which enables attackers to manipulate the TV and potentially upload malware or viruses depending on security weaknesses.

If you’re concerned about just a potential infection by malware, viruses, or hackers, you may still secure your smart TV by adopting the following precautions:

Most modern smart TVs have in-built antivirus software. Sure, it’s signature-based and wouldn’t make much of a difference in the case of Advanced Persistent Threats, but still better than nothing.

If your device’s manufacturer has a native virus scan option, you can run it from the TV’s settings menu and scan your TV regularly.

Update the firmware, applications, and any linked devices on your TV. Attackers and malware authors hunt older firmware and programs with vulnerabilities, but upgrades provide security fixes that really can avoid such attacks.

As your smart TVs access the internet, make your house connection safe. A firewall and antivirus on your network are fantastic ways to keep your smart TV safe from hacker attacks or malware outbreaks. You may also use a complex router password, maintain the router firmware up to date, disable remote administration, connect the TV to a guest network, or create a new network for it.

Don’t use a Web browser on your Smart TV

Don’t use the smart TV’s built-in browser to access the web. Most do not provide the required security features to keep you safe. If you still want to surf, avoid dodgy websites that are often infected with malware, and also don’t get software from websites that the TV maker has not allowed.

Do not Connect an Infected USB drive

Do not connect infected USB drives to your smart TV. Scan them first using your PC to make sure they are not infected before plugging them into your TV.

As usual, keep your apps and Smart TV up to date, run frequent scans, avoid shady USB sticks, and stick to software you know.

Even though it is uncommon for a smart TV to be attacked with malware, it is not fully risk-free. If you are concerned that it may be infected or has already been infected, you can do a factory reset to restore it all to default settings as a last resort.

What is Controller Deadzone? How to Find it and Fix