If you’re looking for a powerful gaming machine, today is your luck day. Here comes the Acer Predator Helios 300 2021 review!

Speaking of gaming rigs, and especially gaming laptops, the main thing you must understand is that they don’t come cheap. The price of high-end components skyrocketed, especially graphic cards, hence this laptop will put a big dent in your bank account, as it retails for more than $1500.

What does it mean? Well, to put it simply, the Acer Predator Helios 300 is not only an excellent gaming rig, but it can also be used for productive (as in money making) purposes, like video editing and graphic design, which makes it the best of both worlds.

So, you can spend a ton of money on this toy under the pretense that, at some point, you’ll start making money with it. This is a cool argument to use if it is your parents sponsoring your shopping endeavors.

Before proceeding with the review, always remember to take proper care of your gaming laptop if you want to prolong its life, and to do so, we would recommend you to read this article carefully.

Acer managed to insert firmly into the “best bang for the buck” market niche due to its reasonably priced products. The Predator Helios is a true-blue gaming laptop, which offers an interesting mélange of muscle, storage potential and screen speed for all your gaming needs.

It’s also true that buying a high end gaming laptop is more expensive this year than it was in 2020, and that’s due to cryptocurrency miners who are buying GPUs like there’s no tomorrow, hence the relatively steep price of this Acer machine, which costs $200 more compared to last year’s model.

The main difference between the Predator Helios 300 of last year and the current one is the Nvidia’s GeForce RTX 30 Series “Ampere” graphics. Truth be told, this GPU is much better as it dramatically improves gaming performance, and that’s why this laptop won a lot of awards this year.

The Acer Predator Helios 300 looks and feels like a gaming beast, due to its all-black chassis, aggressive rear-cooling vents and, most importantly, its red/turquoise (is that a color?) backlit Predator logo staring at you on the lid.

However, the design of the Predator is rather mainstream than radical, at least compared to Alienware stuff, which means it could be safely taken at work without raising eyebrows. Basically, the Acer is designed for a more mature vibe in order to appeal to a mass audience, and that’s a big plus in our book.

The Predator Helios 300 is average in size for a 15.6 gaming laptop, as it measures 0.9’’ by 14.3’’ by 10’’ (HWD), and weighs 4.85 pounds, which is respectable yet acceptable for its screen real estate. Always remember kids: heavy is good, heavy is reliable; and by the way, the Alienware R4 weighs more, 5.3 pounds respectively. 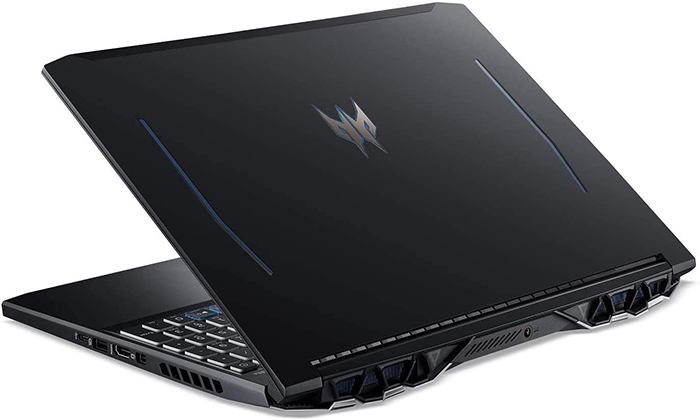 In terms of build quality, the Helios 300 boasts a partial aluminum design, but we would’ve loved a full-aluminum style, just like similarly priced rivals. Aluminum is great for dissipating heat, and also lasts forever compared to plastic, but that’s how life is.

To be more precise, the Helios 300 uses aluminum for the palm rest, the lid and keyboard deck, which means it’s not impressive in terms of build quality, but it’s decent. The chassis has good torsional rigidity, with minimal flex (the same goes for the lid), and speaking of the lid, you can open it with one hand.

Display quality is a deal-breaker in a gaming/productivity laptop, but the Helios 300 really shines in terms of image quality. Everything looks great on the high-refresh-rate 144 Hz FPS screen, and the laptop can easily reach triple digit frame rates in Esport games.

The FPS panel has wide viewing angles, ample brightness, an anti-glare coating and it’s rated at covering 100 percent of the RGB color space, for vibrant visuals and silky smooth pictures.

Since the word of the day is colorful diversity, the same goes for the true RGB keyboard, with 4-zone RGB. You can use Acer’s PredatorSense application to control the RGB thing for each zone, and there’s even a dedicated physical button on the number pad that starts the app.

It’s true that you don’t have per-key backlighting customization, which is available on more costly gaming rigs, but the endless colors on four zones should be more than enough for the average gamer. The app also allows you to save profiles.

The keyboard is gaming-focused, with a long enough throw, and a thicker border on the arrow key clusters as well as on the WASD, which makes them appear brighter. However, the typing experience is not the best out there, or, to put it differently, it’s not great, not terrible.

Acer chose a smooth surface buttonless touchpad for the Helios 300, which makes it very easy to use and very precise due to its stiff physical key action that obliterates accidental presses. If you want to use an external mouse, like real gamers do, you can disable the touchpad easily by pressing Fn + F7.

The 10th gen Comet Lake CPU does not support Thunderbolt 4, yet the laptop offers a more than adequate port selection, including 2x USB 3.2 Gen 1 Type-A ports@5 Gbps on the left side, a Killer E2600 2.5Gbps Ethernet jack, and an audio combo jack.

You also get a Killer AX1650i wireless card, which supports Killer DoubleShot Pro, Wi-Fi 6 and Bluetooth 5. Basically, the laptop can prioritize game traffic over Ethernet, while the Wi-Fi can be used for anything else.

The right edge harbors USB Type-A and Type-C ports of the 3.2 Gen 2 (10Gbps) variety, and you can charge devices on these babies even when the laptop is shut down. Acer also provided HDMI 2.0b and mini DisplayPort 1.4 video outputs, which is nice.

Gaming performance is on par with what’s expected from what’s under the hood, but the Helios 300 features built-in GPU overclocking via a Turbo button, even if the laptop gets noticeably louder in Turbo mode.

Speaking of which, the Turbo augmentation will provide an 8 to 10 percent jump in performance, and that’s not bad. The battery will last 7 and a half hours, which makes the laptop more than practical for traveling.

There are no biometric features in the Helios 300, the likes of face recognition or fingerprint reader. The 720p webcam is of average quality and lacks a privacy shutter, but you can always use a piece of duct tape if you want to prevent Mark Zuckerberg from spying you while watching Anime.

Joke aside, this is not a business laptop, hence it’s kind of normal for Acer to not obsess over security features, in order to keep the price down. As in, we don’t hold the lack of security features against them.

On the bright side, the laptop has good-sounding speakers, and the two heavy-duty fans we told you about do a great job with keeping the laptop cool during extended gaming sessions. The best thing about the cooling design is that it keeps the noise down, as Acer did a bang-up job with minimizing motor and fan whine noises.

You can also control fan behavior from the PredatorSense app, which is kind of cool. Another thing worth mentioning is that end users can easily upgrade the Helios 300, as the laptop provides quick access to its 2x M.2 SSD slots (one occupied from the factory) and the 2.5-inch drive bay.

The RAM is also easy to upgrade, as the system accepts up to 2x 32 GB modules (it comes loaded with 2×8 GB from the factory). This trick is impossible in soldered RAM laptop models.

The 2021 version of the venerable Acer Predator Helios 300 offers solid performance and a smooth 144 Hz display, good port selection and a cool overclocking button, which makes it stand out against its similarly priced rivals. If you can get over the partial metal design and the lack of security features, you’ll end up with a great deal.