Home
Cameras
Megapixels in Camera. How Much Do They Really Matter?
ShareTweetSubscribe

According to our sources, “bigger, better, faster, more” will be the new trend in the following year, but is that really true when it comes to megapixels in digital cameras? How much do megapixels really matter in the real world?

That’s the question that drives people since the first megapixel digital camera hit the market back in the stone age, in 1989 respectively, when Fujifilm released the legendary FUJIX DS-X, the first commercially available digital camera for the masses.

But we’re digressing. The absolute truth of marketing is that tech companies, just like the automotive industry, love to wave fancy-sounding words and big numbers in their ads. Obviously, digital camera manufactures are pretty good at this too; even if the buzzword megapixel is not obsessively used nowadays, at least as bad as it was back in 2015 for example, it’s still a metric for a lot of “noobs” seeking for the ultimate high-tech thrill.

Back in the day, a digital camera only had something like 1.2 megapixels, which is now normal for a low-end laptop webcam. “In the current year”, a premium smartphone or consumer-level DSLR has something like 15 megapixels or more. For example, the “ancient” (2013) Nokia Lumia 1020 boasted 41 megapixels stuffed inside its relatively tiny body.

Does it mean it can compete to a DSLR camera? If not, are megapixels just an urban myth? Okay then, let’s be smart and define the terms first. 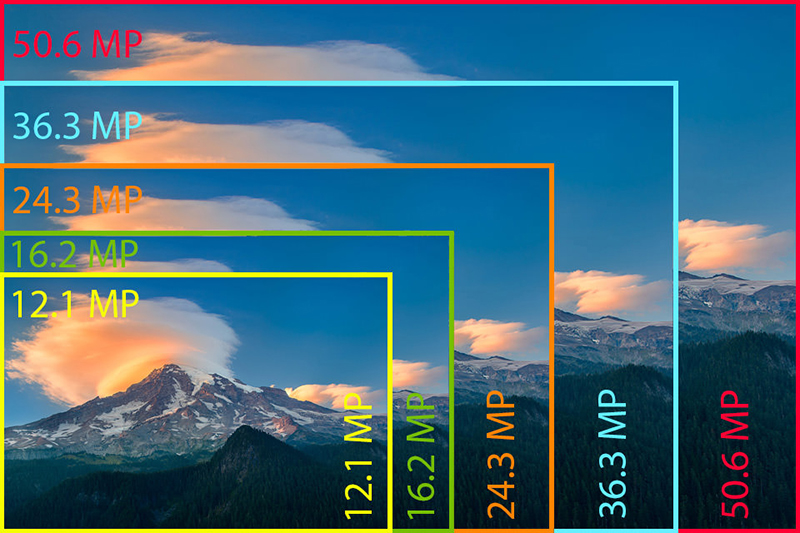 What Does Megapixels Mean?

That’s pretty easy, right? One million pixels equal 1 megapixel, which means a 15-megapixel sensor will produce an image composed of 15 million pixels or tiny dots. However, the number of pixels is not the only metric for evaluating the quality of a camera sensor. Size also comes into play; do you remember the “bigger, better, faster, more” thing in the preamble?

The bigger the sensor (and the lens by the way, bigger is almost always better, go ask your girlfriend), the more light it can absorb, and that translates into generally better pictures, regardless of the megapixel count. That’s why a15 megapixel DSLR will provide you better pictures than a 20 megapixels smartphone. Bigger sensor, bigger (and better) lens, faster shutter speed and so on and so forth.

This is important to understand, especially if you’re shopping for the best digital camera, and you compare two devices with different megapixel counts, but similar sensor and lens sizes. Which brings us to the next issue.

Why More Megapixels Is Better

As we already explained, a digital image is made of millions of pixels. Now, professional-quality photos are printed generally speaking at 300 dpi, or dots (pixels) per inch. The higher the resolution of a given camera, the better, as in you will be able to make larger prints. This is an obvious advantage of a sensor with more megapixels, as it produces a greater amount of detail.

However, if the respective images are viewed on a tiny screen, such as a smartphone display or on your laptop, this metric may not matter much. The biggest impact of a higher megapixel count on a camera sensor is when you’re looking to actually print the respective images out. Before you ask, the 300-dpi thing is considered to be the best print resolution due to our own limitations.

See, the human eye can only see so much detail at a standard viewing distance, and 300 dpi is the best we can do. The lesson to be taken home is that if you require large prints, you’ll have to choose a very high megapixel sensor. As in, high megapixel sensors are ideal for studio or fashion photographers who want to capture every single detail, and to print larger photos.

As an interesting factoid, back in the day, Apple proved that you can actually make billboards from 12MP smartphone images. So, there you have it.

Finally, high megapixel sensors are great if you’re going to use the “digital zoom” thing often, i.e. you’ll end up with a high level of detail when you’re “zooming in” stuff.

The main disadvantage of having a camera with lots of megapixels is that the image file size will be rather large, so you’ll require more storage space and more processing power to edit the images properly.

Another thing to contemplate is that the more pixels you have onto a camera sensor, the less light the respective sensor will see for each pixel due to “crowding”. And that translates into less performance when taking pictures/videos in low-light conditions.

In bright light, a high megapixel sensor, let’s say s 15 MP variety, will do better than an 8 MP one, but in low lighting conditions, the latter will generally deliver more detailed pictures. To drive it home, always remember that low light performance is generally better with low-res sensors.

What Is the Sweet Spot Then?

Okay, so what have we learned so far? The main thing to remember is that modern cameras and smartphones are designed to have enough megapixels for basically anything you want to throw at them. The megapixel metric is no longer the “deal-breaker” that once was, and as soon as you go beyond a certain threshold, let’s say 12 MP, other factors become more important, like sensor size, as we already explained.

A 12 MP sensor in a premium smartphone will allow you to get an image which is big enough for basically anything (we’re not talking movie editing here), while a 24 MP DSLR is more than enough for most of you reading this article. Okay, full frame DSLRs have very big sensors, which can handle more megapixels, so you can buy super-high res 50 MP cameras, but those are niche tools for specialists.

The point being, you don’t need a huge MP rating to make awesome photos for Instagram, so we would advise you to not buy into the megapixel hype; look at other factors, like lens quality, the autofocus parameters, the technology behind the sensor (very important in stand-alone cameras) and things of that nature. All these factors are important in how your device works, so always look further than just megapixels.

The lesson to be taken home is this: it all depends on what kind of tool you require for your specific needs. If you’re a Facebook/Instagram kind of photographer, you don’t really need a super-high megapixel camera, or to spend thousands of dollars on a whim.

On the other hand, if you’re going to shoot commercial and fashion photography, including architecture, landscape and things of that nature, it’s the other way around. Basically, if you’re making money with your camera, it makes total sense to go full Godzilla.