The world of gaming is ever-changing. With the hot topic of Cloud gaming vs. Gaming PC taking new turns and allowing more people than ever to access high-end games, we have seen a lot of debate revolving around video games and violence.

Video games have made a comeback in the press, but this time for all the wrong reasons. This time, the most famous form of entertainment among teenagers and adults has instigated a lot of political debate.

That takes us to the million-dollar question: Do video games cause violence, or has society found a convenient scapegoat for its failings?
People have argued that video games are dangerous since they first became popular. Is there any proof that this is real, or is it just a bunch of lies?

We’re about to deconstruct the evidence and expose the truth about video games and their connection to abuse. We’ll also debunk some common misunderstandings and discuss what we think video game developers can do in the future. Let’s go!

Unearthing What Science Has to Say About It

Let’s get straight to the point: there is very little proof that video games cause violence. There is about as much evidence to back it up as there is to back up the belief that black cats are unlucky.

It isn’t a new finding; studies have shown the same thing for years. Even though the University of Oxford recently published this study, many people still refuse to accept that video games can be beneficial, especially our parents and older people.

Is there any evidence to back up the argument that video games cause people to become violent? As we previously said, not necessarily – but there is one piece of information that people cling to:

He quickly clarified, however, that aggression does not imply brutality. The thing is, we are aware of it. We understand why a parent can feel that video games are harmful.

During a Counter-Strike or Call of duty match, many people who usually are friendly become irritated. When a mother or a sibling sees that behavior, it is quite natural for them to think that gaming is the main culprit for this aggressive behavior.

Such experiments are not peer-reviewed. They don’t go through the same rigorous checks and balances that legitimate research endeavors, let say like finding a cure for Covid 19, would go through.

Most tests and studies conducted by our researchers cannot be trusted enough to form an opinion. Here is why!

Typically, the test subjects like you and me are asked to play video games for 15-20 minutes before answering ambiguous questionnaires designed to bring forth the desired response. To prove a preconceived idea, these researchers work backward. There is not much in the way of “scientific” material about these studies.

Violent Video Games Can Have Adverse Effect On Children

While we have heard it a lot, we don’t think there is any objective scientific evidence for this one. We’re not sure why this argument is still being spread around by researchers; although there might be some merit to it, it is easy to dismiss.

In any case, it’s clear that those who make this claim often skip right over the “struggling at home” aspect and blame the problem on video games.

For this reason, regulatory bodies like the ESRB and PEGI exist. They regulate the gaming industry. Games aimed at a mature audience are rated accordingly. Minors are not permitted to play these games.

In all honesty, this topic is a perfect example of poor parenting being used to criticize a thoroughly enjoyable form of entertainment. Consider it like blaming knife manufacturers and the automobile industry for a few irresponsible parents who let their children and teenagers play with kitchen knives and ride heavy bikes.

Developers of video games are not villains that sell ultra-violent games to children. According to essential facts, less than 29% of gamers are under the age of 18. Since the bulk of the target audience isn’t teenagers, video games have mature content.

THE BLAME GAME IS BEING PLAYED

People despise taking responsibility, regardless of the situation. Examine these two scenarios to see if you can figure out who is more likely to be the perpetrator of violent behavior.

I know my answer, and I am sure you share a similar opinion.

If you see a child with a gun, a realistic assessment of the child in possession of a weapon will be that he or she has a rough home life and mental problems that come with it. Sadly, people tend to form different opinions when it comes to video games.

It is similar to the previous point, “60 percent of middle school boys who played at least one Mature-rated game hit or beat up someone,” according to a commonly quoted estimate.

Yes, violent games are generally preferred by aggressive people, but studies have shown that this is a positive thing. Aggressive people must find a way to channel their anger, or it could have negative consequences.

Violent video games causing violence is a common opinion among older adults. Even though it would be better if they tried out video games on decent gaming computers, as they would realize just how much fun gaming could be!

It assumes that people cannot tell fantasy from reality, which, while valid for a small percentage of the population, isn’t true for the vast majority of us. Let us take, for example, Tom and Jerry to explain it.

Many of us grew up watching the cartoon, and we all remember Tom being pulled across a cheese grater. We also witnessed him being thrashed by a mallet, a coconut, a spoon, a piano, and various other objects.

How many of us wished we could beat Tom? We are guessing there are not too many. It is almost disrespectful to say that gamers will start treating make-believe violence as actual violence.

With that said, people have most likely taken measures to prevent misinformation from spreading. As you can see below, several people have taken to social media to spread memes about video games causing abuse. 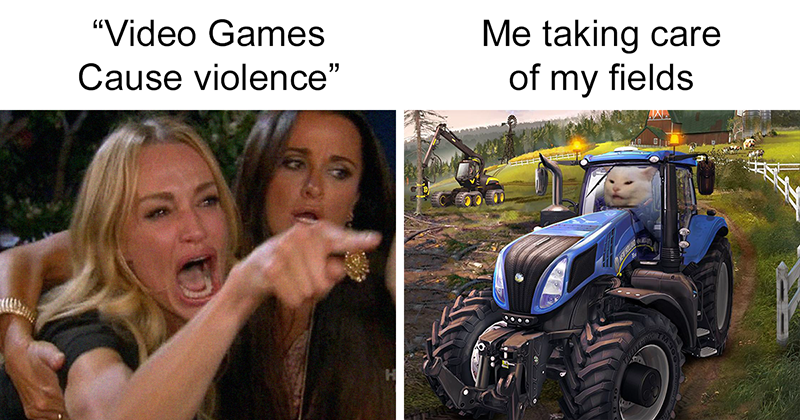 Though memes are amusing, this wonderful hobby is still under threat, and the game developers have the power to help us.

Despite the lack of hard evidence that violent video games cause people to become violent, developers must nevertheless take action. It is not enough to ignore the fears of people who have been deceived; reforms must be constructed and implemented.

We’re not saying that video games should reduce violence; instead, they should make it more meaningful. Take, for example, GTA or any first-person shooter game, where you get to shoot a bunch of thugs while listening to upbeat music, but it all changes as you get closer to the ending.

The music stops, and you are left to retrace your steps in silence over a carpet of bodies. A few first-person shooters game out there can be used as an example – basically, any game that features violence with a realistic twist.

Games in which you can shoot cowering civilians and live with the consequences, or games in which refraining from aggression has significant advantages. Violence, but not in a way that glorifies it.

The famous TV show on HBO, Game of Thrones, does a decent job of this. The violence is prevalent, but everybody suffers as a result. You might also say that Grand Theft Auto does something similar – if you want to hear the thoughts on GTA and other controversial video games, check out this thread!

According to many papers and researches, video game exposure is only one of the risk factors for violent activity and aggression. Multiple reports point to prejudice and racial hatred, mental health, unequal social structures, and quick access to firearms and other deadly weapons as a fundamental cause of violence.

Focusing on violent video games as the cause of mass shootings would almost divert politicians’ and elected leaders’ attention away from more critical issues.

With that said, there are still plenty of people who believe violent video games cause actual violence. If you cannot persuade them otherwise, send them to read this article, it might change their views.