A motherboard is a printed circuit board that allows communication between a diverse range of components in your PC so that it can function.

The need for peripheral input on the motherboards is minimized though it depends on your requirement. For instance, if you’re into video gaming, it’s recommended that you attach a separate video card with your motherboard.

However, before you can think of doing any such thing, you must know how the motherboard works. Though the whole working principle of a motherboard is quite complex, but we have streamlined it in our guide below.

How Does a Motherboard Work? Everything that You Need to Know!

Different models of the motherboard have different types of ports, dimensions, and mounting holes – in short, different form factors. The most popular of these form factors include;

A Central Processing Unit (CPU), also known as a processor is that component of a computer system on which its performance depends. The better the CPU, the faster is the computer.

Back in the day when the computer was a brand-new phenomenon, all CPUs used to have a set of pins called Pin Grid Array (PGA) that could be fixed into the Socket 7 of any motherboard. This meant that any CPU could be connected to any motherboard.

Nowadays, CPUs of neither of the top-notch computer manufacturers like Intel and AMD can be fixed into Socket 7. It’s because the CPUs of the modern era comes packed with an array of features that inevitably need more pins to be fully operative.

If we talk about the most recent Intel CPU, it has a Land Grid Array (LGA) instead of a PGA. LGA is also called Socket T and what stands it apart from PGA is that in its case, the pins are on the socket rather than on the CPU. 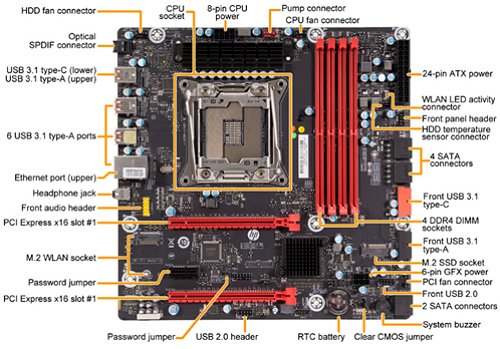 There are numerous chips, slots, and ports on the motherboard that play a key role to play in its working. Remember that some of these are not used anymore as they have been replaced by better technology:

The chipset connects the CPU with the motherboard, thereby acting as a bridge for all the information that has to travel from the CPU to the motherboard or the other way around.

The chipset is made up of two parts – northbridge and the southbridge. The northbridge is in direct connection with the CPU through the front side bus (FSB). The memory controller on the top of the northbridge makes it possible for the CPU to access the memory.

On top of that, northbridge also has a connection with the AGP or PCI Express bus.

The southbridge, on the other hand, is connected to the CPU through the northbridge which explains why it a comparatively slower. Other than that, some buses connect the southbridge to the PCI bus, the USB ports, and the IDE or SATA hard disk connections.

A data bus is a circuit that connects all the parts of the motherboard and hence, controls the flow of information between them. The more the data flows in a given time (speed of the bus), the more productive can the motherboard be for that specific duration.

Bus speed is generally linked with the speed of FSB. Since FSB connects the northbridge with the CPU that in turn, grant CPU access to the memory, FSB can have a considerable effect on the overall functioning of the computer.

There are some other very important buses found on the motherboard:

The memory of the computer, more commonly known as random access memory (RAM) has a direct say in how much data can be made available to the system and the speed with which it will travel – the more the RAM, the more the data travels and at a greater speed.

Similar to other components of the computer, RAM fits into the motherboard through a series of pins. Most of the advanced motherboards can fit multiple of such memory chips. However, each memory chip must have the right number of pins corresponding to the slot on the motherboard.

How it All Connects?

So, what happens is that when you switch on your computer? Power is supplied to the motherboard.

As a result, the data starts getting transferred via the data buses to the northbridge and the southbridge of the chipset.

The northbridge imparts data to the CPU, RAM, and PCIe. This prompts the RAM to send inputs to the CPU which considers all these actions as an output. After that, data in the PCIe is fed to your expansion card.

The southbridge imparts data to the BIOS, USB, SATA, and PCI. The data flowing to the BIOS causes your computer to boot up while the signals to the SATA makes your optical, hard disk, and solid-state drives functional.

Finally, data is transferred from the SATA to make your video, network, and sound cards functional, making the operating system all ready for your use.

Can Your Mouse and Keyboard Be Hacked? And How to Protect Yourself