The gaming world is advancing fast with new video games that are becoming significantly more visually detailed and complicated than they have ever been.

New rendering technologies such as ray-tracing, which produce real-time reflections, lights, and shadows that are considerably more real than just what we’re conditioned to accept in games, have helped in these giant strides by tech companies such as NVIDIA.

You may not realize that NVIDIA’s features include another one called Deep Learning Super Sampling, or NVIDIA DLSS, which is even more game-changing.

Everything you need to know about NVIDIA DLSS, including how it works and what it can do for your PC games, is right here. Let’s get started!

What is NVIDIA DLSS?

DLSS is a video rendering technology featured by NVIDIA that aims to increase framerates and video quality by drawing frames at a lower resolution than projected.

It utilizes element deep learning (a sort of artificial intelligence) to elevate the frames to seem as crisp as anticipated at the native resolution. For instance, with DLSS, a game’s frames might be produced at 1080p resolution, allowing for greater framerates, then upscaled and delivered at 4K resolution, resulting in crisper visual quality than 1080p. 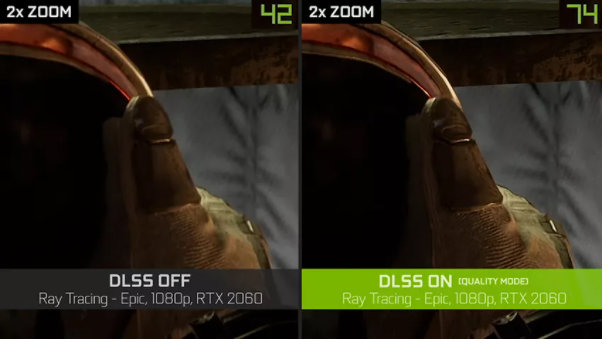 NVIDIA DLSS is an alternative to other rendering approaches that need an RTX graphics card and game support, such as temporal anti-aliasing (TAA), a post-processing algorithm. DLSS is mainly beneficial to games that operate at lower frame rates or at higher resolutions.

DLSS is available in a variety of tastes. However, depending on how DLSS is implemented, this will vary between games. To achieve the greatest outcome, it’s always worth experimenting with different combinations of DLSS and other graphics parameters.

How does the NVIDIA DLSS Work?

NVIDIA’s DLSS instructs a specialized section of your RTX graphics card (20-series and higher) to process a picture and scale it up to your desired resolution. For example, a video game is rendered at a lower resolution (usually 1440p) and then employs its AI algorithm to guess what it would look like if it were rendered at a higher resolution (typically 4K).

This is accomplished through the use of anti-aliasing effects and automatic sharpening. Visual artifacts that would not be seen at higher resolutions are also removed, and the features that should be there in a picture are inferred.

In this way, DLSS relieves your graphic card and CPU of the burden of producing a high-resolution visual with features like ray-tracing enabled. By utilizing DLSS, you may potentially increase all of your graphics settings to their utmost without sacrificing performance.

Many gamers like using super-resolution tools and taking in artifacts. It does, however, allow for the development of a whole image while simultaneously acknowledging that there are several flaws and improvements in the form and aesthetic of that image.

The aforementioned system does not represent a significant advancement. NVIDIA promises that DLSS will improve in the months and years ahead. Still, in the right situations, it may provide a significant performance boost without making the game unplayable.

How to Enable NVIDIA DLSS?

It’s simple to enable NVIDIA DLSS in a game that supports it. Simply launch your game of choice, go to the options menu, and select the graphics settings, assuming your NVIDIA drivers are up to date in GeForce Experience. It’s sometimes referred to as video settings.

After this, you may choose between DLSS and RTX. In this case, select DLSS if the game supports it and your GPU is a GeForce RTX 20 or GeForce RTX 30 or higher from NVIDIA.

The DLSS setting may be found in the Graphics tab of the in-game settings in a game like Escape from Tarkov.

Jumping into NVIDIA GeForce Experience is the other way to test if your machine and game can run DLSS. Once you are in, go to the top-left corner of the app, and select the Home tab. Then look for Escape from Tarkov (or any other game) in the Games & Apps section. There’s a selection of several graphics options when you click on the game.

You may pick between Optimize and a small settings tool symbol from the top right corner. You may move a scale between performance and quality if you pick the tool. Experimenting around with these parameters, as well as DLSS, will have an effect on what your graphic card settings do.

NVIDIA DLSS Available in Over 150 Games

NVIDIA DLSS is not supported by all games! Only 150 games as of Feb 2022 support it. However, its inclusion in many of these games improves performance and graphic quality significantly, especially when DLSS 2.0 or newer is used.

Enabling ray-tracing in compatible games even helps alleviate some of the speed loss. The best DLSS implementations we’ve seen so far are found in the following games (among others):

Valve Corporation is slowly but steadily enhancing the quality of Linux gaming, years after its disastrous Steam Machines by bringing NVIDIA DLSS to Linux.

The planned Steam Deck portable is based on Linux, and its ProtonDB compatibility layer allows it — and other PCs — to play Windows games.

Valve has now officially integrated support for NVIDIA’s DLSS machine learning temporal upscaling algorithm to ProtonDB, which might result in significant FPS gains and less flicker in videogames that support it.

DLSS Gets Better Over Time

NVIDIA DLSS has the potential to facilitate players who are unable to achieve acceptable frame rates at resolutions higher than 1080p to do so using inference.

DLSS might become the most important feature of NVIDIA’s RTX GPUs in the future. They aren’t quite as strong as we had anticipated, and the ray-tracing effects are nice but have a significant performance impact, but DLSS provides us the best of all worlds: better-looking video games that also perform much better than before.

By Uneeb Asim
TV and Audio