What are LTE and LTE+? Everything You Need to Know

Our computers and devices are better connected than ever before. As a result, we are consuming more and more data, and are constantly on the lookout for devices to increase our network speeds and reduce the latency (such as through the use of some of the best routers for online gaming).

4G LTE is no longer the latest craze as we have 5G networks now that are currently being deployed in countries all over the world. Despite this, 4G continues to be the backbone of most consumers’ daily data demands, with far better speeds than the preceding 3G and 2G standards.

But what precisely is 4G Long-Term Evolution (LTE), and what is LTE+? Here is everything you need to know!

While 5G may be the cellular technology talk of the year, LTE and LTE+ connectivity aren’t going anywhere. Unlike past generations of competing mobile network technologies, 5G and 4G will be able to collaborate to provide you with the best possible connection to the web.

1G focused on the voice at first, then 2G added texting to the mix. Finally, the 3G revolution introduced data. Then, 4G improved the network latency issue and massively increased the bandwidth.

LTE stands for Long Term Evolution, and adding it to 4G does not improve it, contrary to popular perception. Instead, LTE is marketing language for a 4G service with training wheels and lofty ambitions, effectively putting a symbol next to 4G and indicating that it is still under development.

LTE gives you faster connections so you can watch videos, have conferences, download huge files, give presentations, and edit papers, among other things. But, of course, it all depends on where you are in the world and on your router, switches, access points and gateways.

For the sake of comparison, 3G has a maximum download speed of roughly 3.1 Mbps. That makes 4G LTE a lot quicker than 3G, but not quite fast enough to meet the ITU’s high target.

Instead of dubbing this new and upgraded service “way better than 3G but not quite 4G yet” or “pre-4G”, cell phone companies chose “Long Term Evolution.” In other words, we’re “on our way to 4G but not quite there yet.”

In the last few years, wireless technology has finally caught up to the pure, unfettered 4G expectations and needs. Proper 4G speeds of 100 Mbps have been achieved, but there’s nothing sexier than calling it 4G and abandoning the LTE like a bad habit. So we’d like to introduce you to 4G LTE+ or LTE advanced, thanks to slick marketing.

LTE+ is essentially a more advanced form of current LTE connectivity that employs several other approaches to justify the progressive moniker. Carrier Aggregation (CA), improved utilisation of current multi-antenna techniques, and support for Relay Nodes are among the additional features introduced in LTE-Advanced.

All of these are intended to improve LTE network and connection stability, bandwidth, and speed. But what about LTE+ data? If we take the example of Verizon, its 4G LTE+ has 50% faster peak speeds in cities nationwide as compared to 4G LTE.

So, the Difference Between LTE and LTE+?

Without a doubt, LTE+ is up to twice as fast as the 4G LTE we’ve come to expect. This is a significant improvement that deserves to be celebrated.

Everything is faster and more efficient with LTE advanced/LTE+ in the duel of LTE against LTE advanced, including download speeds, calls (VoIP), and text.

More good news: you don’t need to rush out and buy a fancy new LTE advanced phone to get LTE advanced support. Phones that are 4G ready will continue to work, just at a faster rate than before.

And what about 5G phones? These will also function with 4G LTE/LTE+. Because 5G is so new and focuses on so much more than simply phones, today’s 5G phones are backward-compatible. The introduction of 5G should actually complement existing LTE services, resulting in higher LTE/LTE+ speeds everywhere.

How Fast is LTE and LTE+?

Now that we have developed a clear understanding of what LTE is, LTE connectivity and a clear sight of advanced LTE, we will move on to the actual speeds.

For beginners, the performance and speed of your connection are affected by the number of users and signal strength in your location. According to Open Signal data, the top 25 countries offer several 4G download speeds of 37Mbps and upload rates of 10Mbps. In addition, the fastest 4G LTE countries have average download rates of up to 150 Mbps, while this is still uncommon for most users.

In comparison, the tangible results of older 3G networks can vary quite a bit. HSPA networks have the highest possible download speed of 14 Mbps and an upload speed of 6 Mbps. However, they rarely achieve this. A decent LTE network will often be 5 to 10 times faster than the fastest 3G coverage. 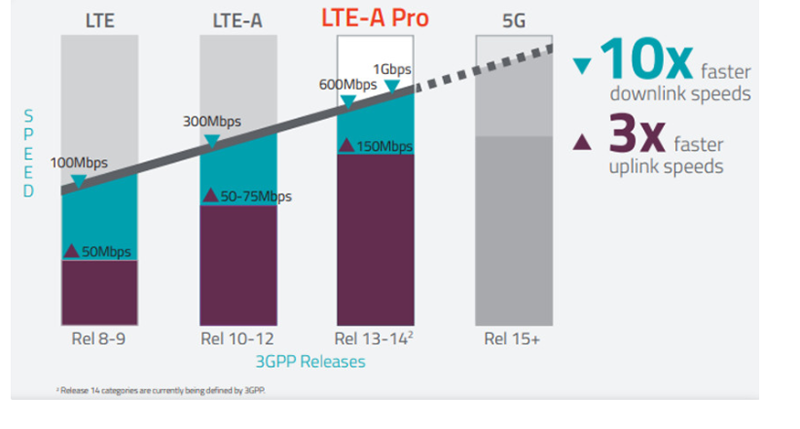 What About the Tech in Your Phones?

The thought of “What is LTE?” is only one piece of the puzzle. There’s more to this technology than meets the eye.
To keep things simple, the user equipment is divided into several categories, each of which is designed to deliver a specific set of capabilities and speeds depending on a spec release.

This is the most common number found on a smartphone specification sheet. Release 10 included LTE+ speed and MIMO improvements. However, there are newer Releases for Category 16 and beyond for 5G. See the table below:

Few Words on 5G to Wrap Things Up

The deployment of fast LTE networks isn’t yet complete. As a result, many more users must be brought online, and infrastructure must be improved all across the world.

Even outdated technology are expected to persist for a long time. For example, despite the industry’s deployment of 5G connection, 4G penetration is expected to reach nearly nine billion devices by 2020, according to GSMA Intelligence. 5G is merely the next step in the evolution that began with 4G.

5G technology, like LTE+, expands the number of usable bands while aggregating data from a broader range of spectrum frequencies. In addition, 5G, like LTE and LTE-A, necessitates new carrier radio technologies and new hardware inside our handsets. In 2020, these technologies became widespread, and in the future years, many more users will go online using them.

By Uneeb Asim
TV and Audio