Razer makes some of the best gaming peripherals in the world, so today we present you with the Razer Kraken review. Time to release the Kraken! 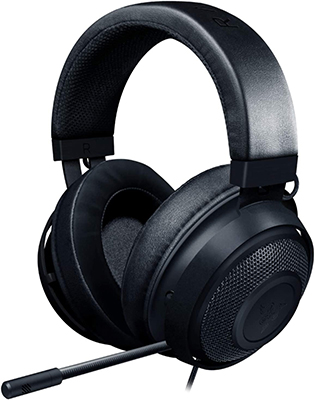 The Razer Kraken is quality gaming audio for all, a mild update over the Kraken Pro v2, and arguably the best release in terms of gaming audio as per 2019. So yeah, this is not the latest and greatest headphone from Razer, but a solid choice if you’re looking for a cool pair of gaming headphones and you don’t have a lot of money to spend.

In other words, the Kraken is an interesting gaming headset, featuring a light aluminum frame, and a retractable noise-isolating mic. Keep in mind that there’s a difference between a gaming headset and regular headphones, and if you want to learn more about this issue, go read our article.

Compared to the previous Pro v2, the Kraken is not a revolutionary improvement, as the company chose to take a rather mild approach in terms of improving something already great. For example, there’s a more comfortable and thicker padding in the Kraken compared to the Pro v2, an improved microphone (retractable, noise isolating) and cooling gel-infused ear cushions, which are impressive during extended gaming sessions in the summer.

However, we must mention that audio-quality has not been improved with this upgrade, yet the Razer Kraken Pro v2 already offered fantastic performance in terms of SQ, so we have no complaints in this department. Bottom line, if you’re shopping for the best gaming headset under $100, keep reading.

The Razer Kraken is designed for supreme comfort and booming audio, being a mid-range gaming headset with a current retail price of around sixty bucks, give or take. You have three colorways to choose from: black, green, and pink (for chicks streaming on Twitch, naturally), and as far as design goes, the Kraken looks pretty much alike as its predecessor.

As in, the bauxite aluminum frame is still here, and that’s great (if something ain’t broke, don’t fix it, right?), as it gives the Kraken a light, nice feel. The same goes for the flexible and tough braided cable, and the 50 mm drivers.

Considering the fact that most sub $100 headsets have 40 mm drivers, the Kraken really gives you a run for your money (bass baby), and keeps the mute toggle for the microphone, as well as the inline volume controller, allowing you to control audio and shut off the microphone with ease.

To put it another way, ergonomics and comfort are great, and that’s crucial in a gaming headset. Since we’re talking comfort, the new model also has better padding around the ears, besides thicker padding along the headband, and the addition of cooling gel into the earcups makes them as cool as humanly possible (pun intended).

The ear cushions have the same size as the v2s, which means they are big enough for any head. Moreover, where other gaming headsets might start to feel heavy over your ears and/or offer zero breathability, the Krakens are shockingly light (322g), despite their generous dimensions, as they’re clearly designed for heavy use.

One design feature that really impressed yours truly is the indented channels along the ear cushions for people wearing glasses, which make a huge difference in overall comfort for “4-eyed gamers”. Kudos to Razer for that!

We must mention one nasty thing though: the Kraken comes with a 3.5 mm jack, and that means you’ll get limited software compatibility, i.e. Razer’s Synapse gaming software will fail to recognize your headset unless you buy either the THX Audio DAC that comes with the Kraken TE, or get the aftermarket USB Audio Enhancer.

That’s a bummer, more or less, but we had to mention it. There’s also good news though: you can simulate the surround sound experience anyway with Razer Surround software, so after all’s said and done, there are ways around anything.

If you’re the console type of gamer, you must learn that the Kraken is fully compatible with PS4, Xbox One and Nintendo Switch.

Since the headset is supremely comfy and light, playing games for extended periods of time presents no significant problems, even if SQ is not the best in the world. However, considering the price asked, you should not expect miracles from the Kraken. After all, you get what you paid for, and it looks like Razer emphasized comfort and build quality over SQ, and that’s understandable: gamers are not audiophiles, or most of them aren’t.

In games, the headsets does a fantastic job, with enough detail to hear the metallic sounds of a magazine reloading, and more than enough bass to give grenades and jetpacks a satisfying boom. So yeah, there are no major complaints in this regard.

Sound quality is sufficient if you’re into modern so-called music, and you can certainly use the Kraken to listen to YouTube/Spotify all day long. However, if you’re into classical music, jazz or anything that emphasizes vocals and instrumentals, look somewhere else, this is not the droid you are looking for.

But, considering the price asked, this gaming headset offers fantastic audio quality overall, there are no complaints here, we are not snobs or unrealistic.

According to Razer, the Kraken has an improved microphone, a retractable mic respectively, which is nice touch if you just want to play some tunes or play a game in single mode. The communication aspect work pretty good as far as mic quality is concerned, yet voice doesn’t sound that great, and it can easily get muffled by other in-game noises.

There’s an ambient-noise-rejection feature though, a minor upgrade over the v2, in order to make the mic better at ignoring background noises, so your chat partners don’t have to listen to blaring sirens, the ATF busting inside your house, or the barks of your stupid dog.

However, in real life, this feature doesn’t make much difference, as the Kraken seems pretty good at picking up distant sounds, but truth be told, this isn’t a major concern after all’s said and done, as the background noise is at a low enough level to keep your voice audible.

The point being, it doesn’t worth the upgrade from v2 to Kraken if you’re looking to get rid of ambient noise. This ain’t gonna happen man, to quote uncle Joe.

We must also mention that there’s no difference (SQ/microphone) in how good (or bad  ) the Kraken is whether you’re using it on PC or on console, as in this headset pretty versatile.

Bottom line, there’s not a whole lot wrong with the Kraken for the money asked. Razer is a company that has been crafting gaming gear for a while now, especially this model, so now all of the issues with this headset have been ironed out.

The Kraken is a great buy if you’re looking for a no-nonsense gaming headset, that’s big enough for your pumpkin head, supremely comfy to wear even with glasses on, offers more than decent sound quality, not to mention the gel infused ear cups and the retractable mic.